Board of Supervisors to Honor County 9-1-1 Dispatchers, Dispatchers of the Year

“This is an opportunity to honor the women and men who serve as our public safety dispatchers, and who are the voice at the other end of the 9-1-1 call assisting distraught callers,” said Board President Dave Cortese.  “I am proud to honor our County Communications Department and the Dispatchers of the Year.”

The County Communications Department operates a consolidated (law, fire, and medical) emergency communications center that is staffed by 130 employees, including 99 dispatchers who answer approximately 42,180 calls per month, 59 calls per hour, 1,406 calls in a 24-hour period, and 506,164 calls per year.

“County 9-1-1 Dispatchers are an essential link between the community and first responders,” said County Communications Director Jason Bivens.  “Those of us working with them every day understand just how difficult their job is and we greatly appreciate their competency and professionalism.”

Dispatchers are responsible for answering “9-1-1” and “Non-Emergency” calls for service in the unincorporated areas of Santa Clara County, and the contract cities of Saratoga, Cupertino and Los Altos Hills. They provide advanced pre-arrival instructions to callers in distress and process emergency medical service calls for several contract cities throughout the county.

The Santa Clara County Sheriff’s Office, Fire Department, and Emergency Medical Services (EMS) Agency rely on County Communications as their primary dispatch center. It is also the regional coordinator for mutual aid, and acts as a backup to all other 9-1-1 centers in the county. The department has been recognized by the International Academy of Emergency Dispatch as an Accredited Center of Excellence in Emergency Medical Dispatching since 2002 by providing callers reporting medical emergencies with appropriate physician-approved medical instruction while help is on the way.

Emergency Dispatchers are often referred to as the “first-first” responders, as they have the first contact with callers and are the voice behind the radio when police, firefighters and medical personnel are responding to emergency situations.

“If you’ve ever been the victim of a crime, been in a collision, reported a fire or needed emergency medical help, you’ve probably called 9-1-1 and been helped by a dispatcher,” said Supervisor Mike Wasserman. “These courageous professionals are sometimes the forgotten component and unsung heroes of public safety.”

Telecommunicators Week began in California in 1981, and 10 years later in 1991, Congress introduced a resolution recognizing the official name of the week as "National Public Safety Telecommunicators Week." Every year, the second week of April marks a time to remember the critical role that 9-1-1 dispatchers play in helping to keep the community safe. 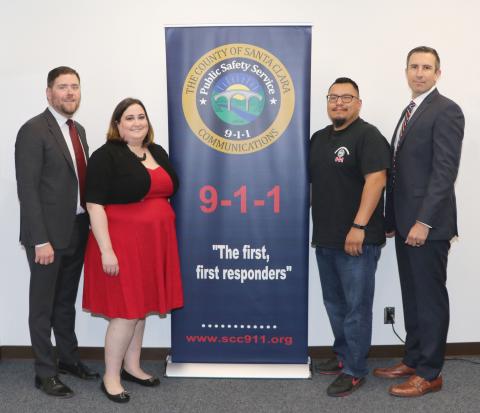